A Tya Lunar from the far West

Sarineth is a lithe, athletic woman with extensive facial tattooing and scarring that clearly predates her moonsilver tattoos. She normally wears only trousers and a loose, open jacket, but she chooses to bind her breasts among non-Westerners, who may not know about the cultural tradition from which she comes. Among her own people, Sarineth is a Tya, a woman culturally recognized as a man so long as she obeys certain taboos. On the open water, her crew always calls her “sir” and “he,” but she remains “she” on dry land.

A Tya merchant and pirate with her own fleet (only three ships, but it’s still a fleet!) working in opposition to the Guild. Sarineth was nearly killed by the Guild for her audacity, and surviving their attempt on her life against all odds was what gained her Exaltation. Even though she’s now one of Luna’s chosen, she feels like she’s running in circles trying to curtail the Guild’s efforts. She still claims the Tya identity though she’s borne two children since becoming Exalted—one with a mortal man, given to her land-bound sister to raise, and the other to a sea god, with whom she is trying to raise their child.

Sarineth is at the moot because she hates the Guild and hopes the circle can aid her efforts against them. She dislikes moralizers, but has no feelings one way or the other about most Solars. 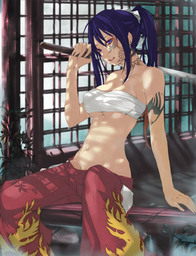