A Denzik merchant and diplomat

Uwala Six-Chandler Emporos of the Sevenfold Shandar clan (Vaikil branch) is a Denzik merchant, sharing her family’s specialty in trading exotic goods. She also acts as a mouthpiece for the clan elders when negotiating with drylanders. Though she could afford top-notch protection and has many relatives to draw on for protection, she herself is a diplomat rather than a warrior.

Uwala is the eldest daughter of a prominent shareholder clan of the Denzik people, putting her in a good position for early entry into a significant position for her people. Like all Denzik, she started at the bottom and worked her way up, holding half a dozen different jobs from the time she was 12 until she came into her majority at 16. She took and passed certification exams for six different chandler-clans, making her a skilled craftswoman in several fields at the young age of 26.

When dealing with drylanders in unusual situations, Uwala is the frequent choice for first contact due to her uncanny knack for picking up on the tenor and tone of conversation for negotiations. She is grim and cheerless with Skullstone Islanders, demure and nonthreatening with Coral pirates, friendly and open with the Wavecresters, and perfectly schooled in etiquette with the Realm. Uwala speaks at least five languages proficiently; she sometimes jokes that she doesn’t allow herself to take another spouse until she learns a new language to seduce them with.

When not working—which is uncommon for the career-driven woman—Uwala shares a berth-hold with her two husbands, her wife, and their four children. 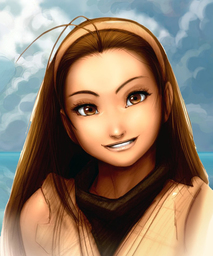