A Guild factor with reason to dislike the circle.

Nothing is known of Mistress Shun’s combat abilities, except that she most likely has none as a low-level functionary for the Guild.

Shun Xue Mah is a Guild factor, a rank describing anyone of sufficient competence and ability to act as an administrator for a Guild waystation. Factors serve as the low- to mid-ranking members of the world-spanning organization, ranging from mere paper-pushers to ambitious merchant princes. The woman known as Mistress Shun was the factor for the station at Ocho-Rin Hill, before the circle led a slave rebellion and overthrew the Guild’s control. Mistress Shun was last seen traveling north with Commander Tranh to report the loss of the station to the Guild. Mistress Shun is an attractive, brown-haired woman in her mid-30s who habitually wears a cheongsam in the Northeastern style and reading spectacles. Her looks are marred by her near-constant pinched expression, like she’s sizing up how many dinars her conversational partner’s skin is worth.

Mistress Shun and Commander Tranh returned to Ocho-Rin Hill at the head of a mercenary army with the intent of redeeming their failure in the eyes of the Guild. Gideon was going to eliminate her before the battle began, but his efforts were interrupted by the Sidereal called Shooting Star. After the battle’s conclusion, the circle spared her life in exchange for her service and experience with finances. Mistress Shun now serves as a bureaucratic functionary in the city of Ochorin. 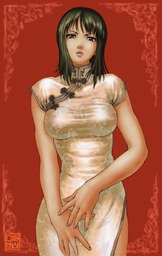