The God of Cooking

Sikksan is a terror in personal combat. His proficiency with knives, skewers, bludgeons, and creative uses of fire does not stop at the kitchen door. Indeed, he is the creator of a Celestial Style of martial arts: the Orichalcum Chef Style. He prefers to avoid combat, however, and resolve disputes with peaceful conversation over a shared meal.

As a high-ranking celestial god in the Bureau of Humanity, Sikksan has broad, far-reaching authority over the concept of “turning raw ingredients into finished food.” He answers to the Shogun of Edibles and Potables, but is otherwise left to his own devices. One of his favorite subordinates is Three-Tined Geshiva, the Daimyo of Noodles.

In ancient times, Sikksan was held in high regard by the Solar Exalted. Many studied at his right hand for a time, learning how to perfect one of the most universal of human concepts: cooking. Indeed, for a time in the High First Age, it was considered a greater honor to have a simple meal prepared by a host’s own hand than a fine meal prepared by servants.

Sikksan’s power waned as the Celestial Exalted became paranoid and fearful of one another. A meal prepared by a Solar could hold some dread poison or an emotional compulsion toward the cook. As the First Age passed into decadence, it became common practice to foist the crafting of food off onto servants for the “safety and security” of one’s guests. In truth, many of the indolent Solars had simply decided that such “menial” tasks were beneath them.

After the Usurpation, Sikksan mourned the loss of many of the greatest chefs of Creation. The Contagion was an even greater loss, as it made extinct many of the animals and plants needed for recipes, and wiped out entire cultures’ menus. Still, Sikksan knows that his guidance will always be needed so long as there are people to feed and food to feed them with.

Sikksan maintains a rivalry with the Salt Kings. He considers their sacrificial needs nothing short of extortionate, since salt is necessary for so many basic forms of tasty cooking and food preservation, and they dislike his willingness to give to humanity with nothing asked in return. 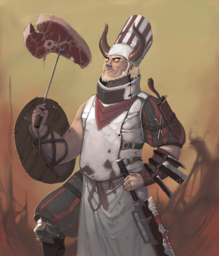