A serene Fire Aspect who was once Chief Miko of Three Oaks, but is now a renowned swordfighter and Guardian of the valley.

Cinder has a passing familiarity with Terrestrial Circle sorcery, as well as divination and other charms she developed and perfected during her days as a regular miko, but now she focuses almost exclusively on blade techniques, favoring an Iaido(“speed-draw”) style with her powerful daiklave, Ivory Blaze Dancer.

Smoldering Cinder was once just another young miko preparing for eventual stewardship of the Three Oaks shrine. It was a life of study, meditation, and discipline, and it was something she had looked forward to since her childhood. But then she started showing an aptitude for thaumaturgy. And then, while performing the standard purification rituals in the chamber housing the ancient red jade daiklave Ivory Blaze Dancer, the eternal but subdued flames surrounding the blade leaped to life and enveloped her. When the flames receded, not only did she not have a single singe mark anywhere on her body, but her hair itself had converted to living flame, her eyes glowed like hot embers, and she reached out to close her hand around the hilt of the magnificent weapon, something no person had managed to do in many centuries. And thus began the life of the Fire Aspect Smoldering Cinder.

In the eight decades since her Exaltation, Cinder has become one of the most recognized individuals in the valley. Training extensively with her colleague and lover Cerulean Wake, who Exalted a few years after her, and the soft-spoken vagrant Lilac at Dusk, she served as the first line of defense against the incursions of the Fair Folk for many years, until Soaring Ibis Exalted and managed to completely restore the Wyld Barrier. Now that her martial prowess is less of a daily need, Cinder has grown more philosophical and reflective, spending her days mostly in meditation, training a new generation of mikos, or simply being around Wake and Ibis, her two life partners. Nevertheless, Dancer is ever by her side, and she knows that though life is currently good, all it would take is one fell wind for it all to come crashing down. 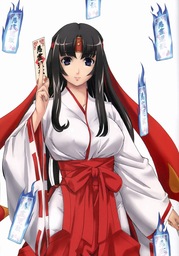