A stealthy vigilante from Nexus, Snapdragon's quiet fury fuels her war against corruption and crime.

Snapdragon is a slim, athletic woman of somewhat taller than average height. Her long, dark hair is faintly tinged with purple, and her eyes are a deep red. Until recently, a terrible scar marked her throat, but she finally chose to have it treated with magical medicine as a sign of getting her life back to something resembling normal. Snapdragon usually wears leather pants, boots, and a mesh shirt, sometimes topped with a half-length leather jacket. She is never without her daiklave, the Grieving Blade, an enormous orichalcum billhook on a chain. Snapdragon also recently reclaimed the other half of the weapon—the Sunflower Blade.

Once, the vigilante called Snapdragon had another name. She gave it up when the Nexus criminal cartels raped and murdered her twin sister, thinking they had caught Snapdragon instead. She went on a roaring rampage of revenge, carving her way to the top of a notorious criminal syndicate, culminating in the slaughter of every man in the mansion of the syndicate’s boss. When she was done, she found that her body was aflame with the fires of the Anathema—and she welcomed the change. From that day on, she would be a demon to the underworld. Her exultation didn’t last, though; when the glow and bloody haze cleared, she found that there was a single surviving witness to her attack—the syndicate boss’s youngest son, a mere child.

Horrified that she had done such things in front of an innocent, Snapdragon fled Nexus and now wanders Creation, looking for villains to destroy and innocents to protect. She has terrible nightmares about her sister’s death, and that the boy she traumatized might someday come to seek her out for revenge. When that day comes, could she lift her blade against someone she herself had wronged? Occasionally, she is also haunted by her Lunar mate, a pacifist Full Moon called Luminous Vesper, who chides her for her bloody ways and acts as her conscience and sometime lover.

Snapdragon went through a personal crisis recently when she was forced to confront the son of the gang boss she had killed. In her effort to rid herself of the guilt of murdering a boy’s father in front of him, she went to Malfeas itself. While she failed to retrieve the boy from Hell, she may have succeeded at something even more valuable: learning forgiveness. 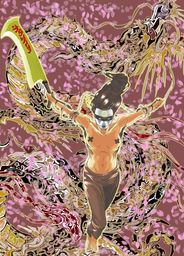