A Songstress of Sol Invictus, entrusted with the protection of the valley of Three Oaks.

Songstress of Sol Invictus, Guardian and Chief Miko of the Three Oaks Shrine

Ibis’s powers include the ability to manifest a bow made of pure Essence, powerful telepathy/empathy, and a commanding grasp of sorcery and thaumaturgy, as well as a mastery of more than one martial art learned under the tutelage of her guardians and the other warriors of Three Oaks.

Born in the Far East and losing both of her parents by the time she was a toddler, young Soaring Ibis was taken in by the priestly order of the valley of Three Oaks, a collection of villages including her home village. At a young age, she began communicating in her dreams with the seemingly-dormant god of the valley, Matsuri-Ono, and this fact, along with her beautiful singing voice, meant that she quickly attracted the attention of the valley’s mikos; before she was a teenager, she had begun training to become a Songstress of the Unconquered Sun, one of the most esteemed positions among the shrine heirarchy. As she grew up, she was eventually trained by Smoldering Cinder, the chief miko of Three Oaks and a powerful Fire Aspect swordfighter. Though just a mortal, Ibis showed a promising aptitude for her miko training, and became the prime candidate for the next High Songstress. When she Exalted as a Twilight Solar during a massive Fair Folk attack on the valley when she was nineteen, she succeeded Cinder as the chief miko, restored the manifesting abilities of Matsuri-Ono and the god of Lake Noamin, Jorudo, and ushered in a new time of peace and stability for all the valley’s residents.

Kind, compassionate, and resourceful, Ibis has since devoted her life to finding a way to permanently protect Three Oaks and its surrounding environs from Wyld incursion. Through a combination of sorcery, her work with the animating intelligence maintaining the Wyld Barrier, Argus, and sheer ingenuity, she hopes to one day be able to leave the villages in safe enough hands to travel the world with her guardians and heal the carnage caused by the Contagion and the greedy fingers of the Realm. She’s also started to yearn for the presence of her as-yet-undiscovered Lunar, though she shares an intense love with both her former senpai, Cinder, and one of the other guardians of the valley, the Water Aspect Cerulean Wake. 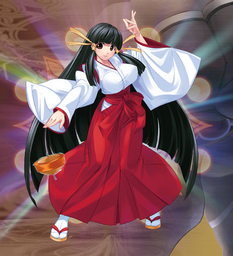