Legend holds that Spinner of Glorious Tales was once a mortal who won divinity from the gods for his storytelling prowess. It’s unknown whether this is true or just another of the stories that Talespinner tells. What little is known for certain about the lackadaisical deity is that he was the patron of a band of nomads after the Great Contagion and led his people to a green and fertile land… that was already promised to two other bands of homeless refugees.

Rather than quarrel over the land, the three tribes banded together and their respective gods formed a powerful alliance. Talespinner became part of a divine triad along with the goddesses Dayshield and Dreamweaver. The three of them wove together a mighty story that drove away their most immediate enemy, the Deathlord called Princess Magnificent, and settled down to establish the city-state of Great Forks.

Talespinner spends the least time in Great Forks of any of the triad, but he deeply loves the city and his people. 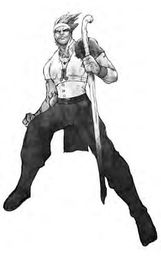