The Disciple of Seven Forbidden Wisdoms

A silent and lethal Deathknight archer

The Disciple of Seven Forbidden Wisdoms has never spoken, to the knowledge of his circlemates. Falling Tears Poet claims that this is because the things he knows would drive anyone else to madness, but allows that it might be simply a flair for the dramatic. The Disciple is an archer of surpassing skill, as well as possessing the ability to conjure blood-written calligraphy that wounds enemies and reveals their weaknesses. He can seemingly teleport between shadows, and has shown the skill needed to hit a precise target with an arrow from over a mile away.

Virtually nothing is known about the Disciple at present. He never speaks—indeed, Falling Tears Poet claims that to hear the Disciple speak would be to invite madness.

The Disciple of Seven Forbidden Wisdoms 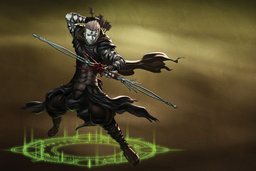