The First and Forsaken Lion

The darkness that comes before the storm

Sometime in the First Age, a mighty Solar warrior died in pointless, terrible battle, dragging his enemies with him down into death. Once he arrived in the Underworld, he could not give up the battle with those enemies and eventually realized that the battle would never be over so long as anything remained for him to fight. When the Neverborn came to the Solar’s ghost and offered him the chance to win at everything, forever, he agreed and became the first of the Deathlords.

The creature now known as the First and Forsaken Lion looks forward to the day he can claim his victory by standing over the violated corpse of Creation itself. Then, when he declares himself the winner, no one will remain to challenge him, and he can rest at last.

Edit: HOLY SHIT IT’S A LION GET BACK IN THE CAR

Edit: Also, he was Red Lion.
TFaFL: “Look at what we’ve wrought! How can you not WEEEEEP?”
Red Lion: “Cool story, bro.”

The First and Forsaken Lion 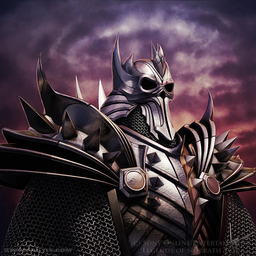