The Maiden of the Mirthless Smile

A masterful deathknight in service to the Mask of Winters.

The Maiden of the Mirthless Smile is an expert fighter, preferring to use twin soulsteel shortklaves in battle. She is a master of evasive maneuvering and stealth, as expected from a Day Caste, and has a fighting stance that is completely impenetrable by mortal-level opponents. In addition, she seems to be able to use her own blood as a weapon, filling the air with arterial sprays that turn into a cutting red wind.

Night Surgeon: (OOG) RL: “Ya know I bet before all this is over it’ll end in Wincest.”
(OOG) Blazer: “Second.”

Before she became a deathknight, the Maiden of the Mirthless Smile was called Dahlia Ivanova—twin sister to Hyacinth Ivanova, the Solar now known as Snapdragon. Hyacinth was a vigilante in the corrupt city of Nexus, fighting for the common people against the gangs and criminal bosses. Dahlia was the quiet sister, the one who acted as Hyacinth’s support from a dangerous world and gave her a reason to keep fighting.

When the leader of a particularly vicious gang finally discovered who was behind the “Snapdragon attacks,” he sent his worst to the vigilante’s home to catch her off-guard. Unfortunately, Hyacinth was out at the time—but Dahlia was there. Not knowing that Snapdragon had a twin, the thugs beat, raped, and tortured the innocent Dahlia in retaliation for Hyacinth’s actions. When they finished with her, they gave her a finishing blow known in Nexus as “the mirthless smile”—they cut her throat from ear to ear.

Dahlia hovered between life and death when the Mask of Winters came to her and offered her a chance at revenge. She agreed without a second thought, but Snapdragon got to the gang boss before she did. Now, she serves as the Mask’s attack dog, waiting for an opportunity to face the person who is really responsible for her rape and murder: her sister.

Since that time, the Maiden has faithfully served the Mask of Winters as a vicious attack dog, reveling in the taking of human life. Only her failure to extract vengeance from her sister has cast a pall on her new “life.” After the Battle of Thorns, the Maiden remains one of the few deathknights loyal to the Mask of Winters.

The Maiden of the Mirthless Smile 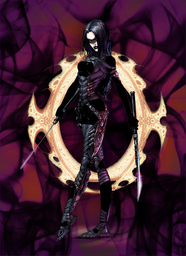