The Walker in Darkness

The Walker in Darkness is an ancient ghost, likely to have been a Solar in his living existence. He is a skilled sorcerer and moderately talented necromancer with the ability to craft various First Age magitech devices, including warstriders.

The Walker in Darkness assumed control of the shadowland now called Walker’s Realm just over three hundred years ago. The area was originally under the control of another deathlord, the Black Heron, but she was driven out by the combined power of the Triumvirate of Great Forks. They seem to have no issue with the Walker, who generally minds his own business.

The Walker is a powerful ghost dating from the First Age. Like all deathlords, he was once a Solar while living but was empowered by the Neverborn after death to become something greater than a common ghost. He remembers very little of his First Age life, however. Unlike the other deathlords, the Walker in Darkness suffers from amnesia—the only thing he is sure of from his previous life is that the Mask of Winters was his murderer. This has left him with a deep animosity toward his fellow deathlord.

The Walker in Darkness is a deeply religious ghost, as shown by his raiment and the frequency of shrines in his palace, the Ebon Spires of Pyrron. He claims to be neutral in matters of war and politics, keeping a standing army only to defend his own territory from aggression. The Walker is a powerful sorcerer, as well as being moderately talented in necromancy. He is capable of producing First Age war machines and magitech despite his memory loss.

He is married to the Green Lady, a Sidereal.

Edit: The Walker is a millenia old ghost said to have lived in the First Age of Man and knows both Sorcery as well as Necromancy, ruling over a large Shadowland that once belonged to The Black Heron who apparently got punked by three river gods.

He agrees that the Mask of Winters is a “douchebag” (said in George Takei’s voice).

Married to a Sidereal Shenaniganizer known as the Green Lady.

“Blazer get your fat ass over here…mmmhmmm…would you like a popsicle…?”

The Walker in Darkness 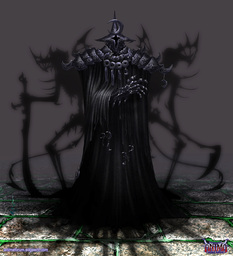