The Lunar mate of the queen of Balidar

Thousand-Year Peregrine is a moderately skilled martial artist, but his real skill is in dealing with the shady side of the law. Before becoming a monk, Peregrine was a smuggler with friends in every seedy bar in the Hundred Kingdoms.

Before becoming a monk of the Sacred Order of the Tiger, there was an Eastern boy named Hanzu. He grew up poor in a shithole of a town in the Hundred Kingdoms, always dreaming of a better life. When it didn’t come, he found a way to take it. Hanzu kept a moral center, unlike most criminals, and eventually became a skilled smuggler and black market trader.

A close brush with death left Hanzu in the care of a group of monks, who gradually nursed him back to health and taught him a credo of self-sacrifice. Hanzu took the name Thousand-Year Peregrine, but never got to take his vows. An army from Balidar razed the monastery, looking to wipe out the monks who taught peasants how to protect themselves from thugs. Peregrine and his friend, Hachi the Tiger, were the only ones to escape the slaughter.

After a while, the two companions hooked up with the Balidar resistance, where Peregrine fell in love with Princess Ariel Nemani, the heir to the throne. The rebellion failed, and Peregrine was turned to stone by a raksha in the mountains as he fled. Hachi saved his young friend’s life once again, and the two of them rebuilt the rebellion from scratch to save their friends and their kingdom.

Peregrine was nearly killed by Black Heart of Midnight, but his will to live and determination to save the love of his life drew the attention of Luna. He Exalted as a Changing Moon and is still learning the bounds of his newfound powers. 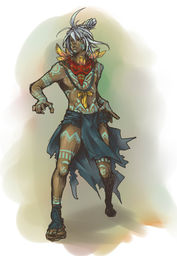