Time’s Arrow has demonstrated lethal capability with the hallmark style of the Chosen of Endings, the Violet Bier of Sorrows. He is highly proficient with the twin hook swords that are the signature weapon of the style, and has greatly enhanced reflexes and speed.

Little is known of Time’s Arrow and his life before his Exaltation, but he has been known to speak bitterly of watching several generations of his mortal family wither and die of old age. Time’s Arrow is a useful agent of the Five-Fold Fellowship, though his peers consider him somewhat hidebound and unimaginative. Time’s Arrow despises factional politics and considers himself an independent—a Sidereal with no faction loyalties. Naturally, this gains him no friends. 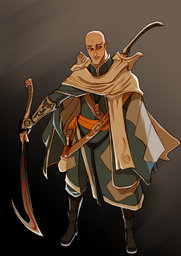