Typhon, Wink of the Storm's Eye

Typhon would be quite handsome except for the cruel cast to his features and his overly pale face with dark circles under his eyes. Overall, Typhon looks like a man who hasn’t slept well in years—and is entirely ready to take it out on the people around him. In contrast to his sickly, untrustworthy look, Typhon is generally quite pleasant in person, cheerful and full of banter.

Little is known about the Abyssal called Typhon. He is a self-claimed patriot in service to Thorns, a loyal servant of the deathlord called the Mask of Winters, but seems less malevolent than many of the deathknights the circle has met to date. His official title is “Wink of the Storm’s Eye,” but the delegates at the Concordat Council refer to him as Lord Typhon. He claims that using a name instead of his Abyssal title makes mortals less uncomfortable around him.

Typhon is an inveterate charmer who has a way with words as well as strong abilities in the field of stealth and infiltration—though he is clearly not as skilled as Snapdragon. He has offered to act as a go-between for Snapdragon and her sister, the Maiden of the Mirthless Smile, in exchange for Snapdragon acting as his advocate to Red Lion and the rest of her circle.

His long-term plans included setting up a diplomatic embassy within Thorns itself for visiting dignitaries and creating a peace treaty with the circle and their allied nations. In return for his aid during the Battle of Thorns, Typhon turned against his master, the Mask of Winters, and has become the official representative of the Eastern Alliance to Marita.

Typhon, Wink of the Storm's Eye 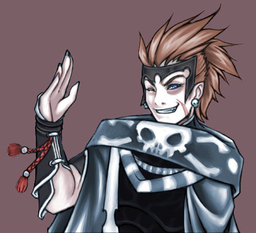