Vartabed Duma is known to be a moderately talented mortal martial artist, having mastered at least the basics of Water Dragon Style. Still, he prefers to deal with problems through dialogue and charity rather than violence.

Nothin special about me mothaf****a

Pandor Duma was born in the city-state of Mishaka and joined the local temple of the Immaculate Faith after the woman he loved married his brother, Kelsin. He rose through the ranks of the priestly branch and was among the most vocal proponents of alliance with Thorns when the Realm began agitating for war in the East. After the Mishakan monarch rejected the proposal, Thorns assaulted Mishaka and conquered it as the opening gambit of the conflict now known as the Thorns War. In the conquest of the city, Kelsin was slain, leaving his wife and young daughter alone.

Duma did his best to use his influence to shield his sister-in-law, Cyan Petal, from scrutiny, which she otherwise would have endured for being a family member of a Mishakan soldier. Duma was elevated to the rank of vartabed—and immediately pushed to the side in favor of Realm monks, who took over the task of converting the Mishakan people. Duma watched in horror as the monks slew the city father and pushed for ever harsher reprisals against a recalcitrant populace. The situation was made worse by the appearance of an underground movement that undercut the Realm wherever possible.

On the day that the rebellion’s leadership was captured, Duma watched the last of his faith die. It turned out that his sister-in-law was the leader of the rebellion, as well as being one of the dreaded Anathema. After she was beheaded, he used the last of his influence to save her daughter, White Apple Blossom, from a similar fate and swore to take her away from the city as soon as possible. Mere weeks later, the Battle of Mishaka liberated the city from Realm control, a victory that likely would not have been possible without the damage and disarray caused by Cyan Petal’s resistance group.

Duma relocated to the small city-state of Yelang along with many other Mishakan expatriates and founded a new temple dedicated to the milder Lookshyan branch of the Immaculate Faith. He gained a reputation as a man of peace and worked tirelessly to help the poor and raise his niece with proper values, despite her morbid nature and lifelong bouts of depression. When she attempted suicide at age eighteen, he forbade her from leaving temple grounds and soon became loathe to do so himself, lest she make another attempt on her own life. Duma spent a year trying to find an appropriate suitor for her before meeting the mendicant scholar called Blazer Orpheus. Given the rumors of a new Anathema surfacing in the region, Duma was happy to give his blessing to Apple and Blazer when they asked to travel to Mishaka together so that she could resolve some personal issues.

Duma still lives in Yelang, waiting for news from his niece. 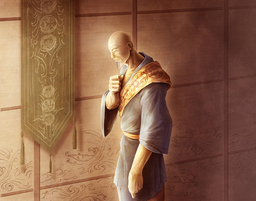