Older than she looks, Venomous Spur has wandered the Far East as a shapechanger for many years before joining her Solar mate on his quest.

Venomous Spur is a white-haired, deeply tanned Eastern woman covered in silver tribal tattoos. She dresses in loose tribal clothing, making her look very much like a white-haired forest barbarian. In her totem form, Ven is a simple platypus, unassuming and easily forgettable. In either form, she is rarely without a plethora of genesis-crafted servants, including takolukas and blittens.

Born over a century ago in a nameless far Eastern village, Venomous Spur would probably have lived out her life anonymously were it not for the raiders who came, thinking to prey on backwater natives. When they attacked her people, she used all of her guile, cunning, and wisdom to drive them away. For this, she was Exalted as a servant of Luna; for her failure to save her husband and oldest daughter, she went mad. For eight decades, she lived on the edge of the Wyld in her spirit shape, reveling in the simple joys of the beastly life to escape the pain of her past.

Ven was finally found by the Silver Pact, who gave her the moonsilver tattoos and apprenticed her to a prominent elder—Raksi, the Queen of Fangs. Ven was horrified in the courts of Mahalanka and ran away again, spurning her mentor’s attentions. She found that her old village has taken to worshiping her as a goddess, but could not stand the attention and demands of her people. She wandered for years, experimenting with the Lunar spirit arts and the science of genesis-crafting, until she ran into her first Solar.

This wandering warstrider pilot turned out to be Red Lion, the Undefeated of the East—her Solar mate. Upon meeting him, she realized that all of her wandering had been to find him. Ven’s feelings for Red Lion transcend love and duty, as do his for her. While she doesn’t always agree with him, she has pledged herself to see his dreams fulfilled, and to fulfill her own through his power. 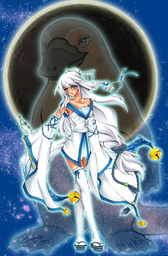