Until recently, young Voshun was a normal mortal, until being taken under the wing of a circle of Solars. Now he has begun to realize the extent of his control over his own destiny and has begun his training in both warcraft and statecraft. His abilities are still weak, but he is now far from helpless.

Voshun possesses the mighty Sun King’s Fist, an artifact weapon forged for him by Blazer Orpheus. The orichalcum smashfist can produce an impenetrable shield upon command and magnifies its bearer’s strength manyfold.

Edit: He also has the hots for Snapdragon.

The latest king of Delsinar is a troubled fifteen-year-old boy who took the throne three years ago after his father’s untimely death. His advisors manipulated him into a war with Mishaka, then abandoned him when it went disastrously wrong. Voshun bears the title “Sun King,” as his line worships the Unconquered Sun, but Delsinar had enough contact with the Immaculate Faith to accept the general view of Solars as “Anathema”—demons who stole power from the sun. With a little nudge from the circle, the Delsinari no longer hold this view and have rejected the Immaculate Faith completely.

Voshun might be sheltered and naïve, but he isn’t a bad person and he certainly didn’t deserve to be murdered by a Sidereal assassin. Voshun is a lanky 15-year-old with dark skin, blonde hair, and green eyes flecked with gold. He owns a bonded pet that Venomous Spur calls a “blitten”—a tiny, helpless animal with the softness of a lamb, the cuteness of a kitten, and a baby’s laugh for a purr. He has named this animal “Blitz” and keeps it with him at all times. He also possesses a mighty artifact weapon called the Sun King’s Fist, a potent smashfist that covers the wearer’s arm in nearly impenetrable armored plates, acting as both weapon and shield.

Most recently, the circle brought Voshun an amazing offer: the throne of Mishaka, and the opportunity to unify the two kingdoms. Voshun is unaware that this is a gambit on their part to begin the unification of the Scavenger Lands under a single banner, but is politically savvy enough by now to realize that the offer doesn’t come without significant strings attached.

Voshun thought he had found a friend in Yervant Izmirlan, a boy of about his own age, only to become embroiled in a plot for Yervant to take revenge on Snapdragon. Voshun was kidnapped by Havesh the Vanisher and was nearly killed in an elaborate deathtrap, saved only by the intervention of Venomous Spur and Snapdragon’s surrender to the enemy. 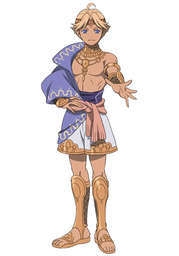