Very little is known of Apple’s powers, though she appears to be able to raise zombies en masse, creating a veritable army of the undead, and can gain the service of powerful ghosts known as nemissaries. In the flight from her ruined laboratory, she demonstrated the ability to shatter stonework with a touch and to open a cenote to a region of the Underworld she refers to as “the Labyrinth.”

She can’t hug every cat and that makes her sad

White Apple Blossom (“Apple” as her uncle calls her) is the niece of Vartabed Duma, a native of Mishaka who relocated to Yelang at the age of five. During the Thorns War, Apple’s father, an officer in the Mishakan Homeguard, was killed by Realm soldiers. At some time during the subsequent occupation, Apple’s mother, Cyan Petal, Exalted as a Solar of the Zenith Caste.

Cyan Petal managed to keep her Exaltation a secret for much of the year of Mishaka’s occupation, forming a rebellion against the invading forces and keeping the spirit of hope alive. After her closest conspirators were captured and executed, her spirit broke and she meekly submitted to the occupiers for execution to spare her people more suffering. She was beheaded before the populace of Mishaka, including her own daughter. At that time, Apple Blossom’s hair turned ghostly white from shock and horror, and thereafter she was called White Apple Blossom.

Growing up under her uncle’s tutelage, Apple became a clever (if sharp-tongued) beauty in Yelang, though she was given to black moods and fits of serious depression. About a year before meeting the party, in the grip of such a mood and under the influence of something she calls “the Whispers,” Apple attempted suicide by hanging. Her uncle cut her down and ran for help, and while he was gone, Apple apparently returned from the dead, newly Exalted as an Abyssal.

Apple spent the next year learning her powers and communing with the dead, finally deciding to use her powers to bring back the Mishakan dead to take vengeance against Thornish sympathizers and those who had stolen from the dead. These plans were thwarted by the interference of the Solars, and a pair of deathknights in service to the Mask of Winters: Mirror of Time Without Reflection and Content Not Found: falling-tears-poet-1. The deathknights had been sent by the Mask of Winters to retrieve Apple, who had been chosen as an Abyssal but not come when called by her “new master.”

After her defeat by the circle, Apple expressed her desire to them: to retrieve the daiklave that had slain her mother. Apple believes that the sword, Cold Blue Fire of the Longest Night, had stolen Cyan Petal’s soul at the moment of death, which is why she had been unable to find her mother in the Underworld. The circle offered to aid Apple in her quest in order to prove their sincerity, and to sway her from the path of destruction.

Apple took up service with the Walker in Darkness, a friendly deathlord, but has apparently turned on him after seeing something that drove her to wreak havoc on the Ebon Spires of Pyrron. Apple claims to have no memory of whatever drove her to commit such act of aggression, only that she still believes that she was in the right.

It was eventually revealed that she had been manipulated into her actions by the Green Lady as part of a ploy to break the Walker’s army before invasion by the Mask of Winters. Since the Green Lady in turn betrayed the Mask, her long-term game remains unknown. Apple still feels used and very upset, and has set herself as the Walker’s guardian while he recovers from her assault—a process that has been less than pleasant so far. 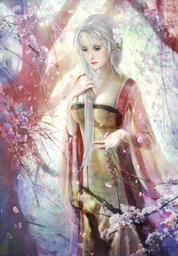