The Bull of the North, Solar warlord

The general known mainly as “the Bull of the North” was once an Icewalker barbarian named Yurgen Kaneko. Elderly even before his Exaltation, Yurgen abandoned his tribe to die on the ice, as is the tradition of the old among his people. Battling for his life even as he sought to lose it, Yurgen was Exalted by the Unconquered Sun and given a vision of a united Creation. He returned to his people and led them in a war of conquest against the North.

Upon encountering Samea of the Blackwater Mammoth Tribe, a Zenith Caste sorceress, his vision of a unified barbarian nation expanded further into the dream of world conquest. Many small nations have sworn themselves to the mighty general, and in his decade of Exaltation he has created an empire spanning more territory than any other in the world, save the Realm. His greatest success came five years ago when he shattered the House Tepet legions at the Battle of Futile Blood, leaving him with no true competition in his race for power.

Rather than press his advantage and possibly spread his forces too thin, Yurgen has chosen to consolidate power and eliminate potential enemies on his own borders first. But everyone knows that the Bull’s next push for greater territory is not far away…

Yurgen is one of “The Twenty-Three,” the Solars whose Exaltations were never captured in the Jade Prison. This group also includes his circle-mate, Samea of the Blackwater Mammoth Tribe, and Blazer Orpheus, who was apparently their circle-mate in his most recent prior incarnation. 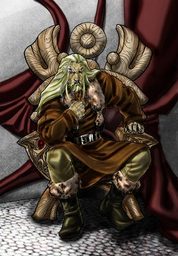