Commander of the Lookshy expeditionary force in Marita

ARE YOU READY?
As a Taxiarch (colonel) in the Lookshy military, Yushoto Mai-Lin is a seasoned officer of many military campaigns. Her current assignment is a semi-retirement to nonactive duty as a military liaison and garrison commander for the city of Marita, the capital of the Confederation of Rivers. Her current command staff are all younger, more ambitious officers without the years of experience that have given Mai-Lin a quiet confidence and lack of reactionary thinking. Like most of her family, Mai-Lin prefers to keep drama out of the equation and is politically neutral. 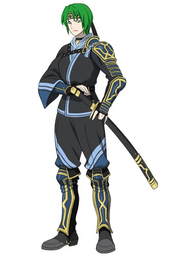