Former commander of the Three Talon Band of mercenaries.

Fights with a sword. Not much else is known, except that he’s tough enough to take a punch from Red Lion and live.

Koeh Tranh was the commander of the Three Talon Band mercenary company, a group under long-term contract with the Guild. Their most recent assignment was the defense of the Guild station at Ocho-Rin Hill, a quiet and out-of-the-way place with little strategic or monetary value. It should have been an easy assignment, the sort of dull mission that would involve little actual combat.

Everything fell apart when the station was attacked by a band of Anathema seeking to disrupt the Guild’s business and free the local slaves. Commander Koeh had his mind controlled by Prism of Truth long enough to lure the station’s factor, Mistress Shun, from her office so the Anathema could issue their ultimatum. The ensuing battle was short and relatively bloodless, with the majority of Koeh’s troops choosing to abandon their posts and join with the former slaves to create a new village of freeman, Ochorin.

Commander Tranh was able to escape Ocho-Rin Hill with Mistress Shun, and the two of them eventually returned at the head of an army of mercenaries to attempt retaking the hill from the freedmen. The battle turned against them, and the two of them chose to join the fledgling city-state of Ochorin rather than return to the Guild and face death for their failure. 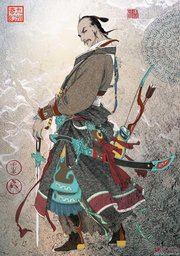