The Mask of Winters

The deathlord responsible for the sack of Thorns, building an empire of the dead

As a millennia-old ghost, the Mask of Winters likely possesses amazing power. He is known to be a superlative necromancer and sorcerer, with legions of the undead under his command, and a ruthless zeal to conquer. Like any ghost of his age, he is likely to be immortal save through the destruction of his fetters—the chains that bind him to the mortal world.

A mighty Twilight Caste sorcerer in life, the Deathlord now known as the Mask of Winters survived the Usurpation through treachery and careful planning, only to die centuries later from boredom, isolation, and the betrayal of his fellows.

Though brilliant and masterful in both battle and magic, the Mask of Winters has demonstrated critical impatience on more than one occasion. Perhaps his greatest triumph and worst miscalculation, his conquest of the city-state of Thorns five years ago both granted him a nearly unassailable position of power in Creation while also tipping off potential enemies to the dangers of the Deathlords.

Some information gained by the circle has indicated that the Mask of Winters might have once been the Solar Exalted known as “Orpheus,” the creator of necromancy and a one-time ally of the Green Lady.

The Mask of Winters 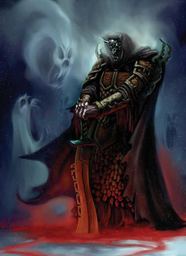