EVERYTHING IS KUNG FU

During the Primordial War, the Primordials sought to starve the forces of the gods by commanding all of the deities of fruiting trees and edible fishes and herd animals to withhold their gifts. By virtue of being on the move with his herds constantly, the Southern god of cattle, Ahlat, avoided these commandments. But man cannot live by meat alone, and cattle are a resource-intensive herd animal at the best of times.

The solution was hit upon by Geshiva, a minor Terrestrial god of seed-bearing grasses. With cunning and subtlety, he taught mankind how to harvest the seeds of “worthless” grasses and grind them into flour. Mixed with common water and heated, this became the first unleavened bread—a food that would form the staple for humanity’s armies thereafter. Geshiva was honored by the Unconquered Sun personally for his contributions to morale and the supply chain.

After the war, Geshiva was offered a major position in the Bureau of Humanity, but he instead chose a reduced position with less responsibilities. The one concession he managed to finagle out of the Incarnae when they were handing out honors was the enshrinement of noodles as a Celestial concept, rather than a Terrestrial matter. This means that every noodle cart in Creation is a shrine to Geshiva, while every noodle shop is a temple. Any prayer said over a bowl of noodles is a prayer to Geshiva. This makes him far more personally powerful than a minor Celestial god would normally be. 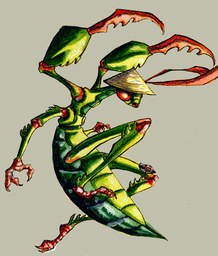